Elvis Presley: Hawaii, May and October 1969

From his first visit in November 1957 to his final vacation in March of 1977 he would visit the Islands of Hawaii on many occassions. Not only did he make three movies in Hawaii (Blue Hawaii, Girls! Girls! Girls! and Paradise, Hawaiian Style) he also came to Hawaii for live performances, the one most well known being the show on January 14, 1973 telecasted world-wide as Elvis, Aloha from Hawaii.

Elvis fell in love with the beauty of the islands and the hospitality of the people of Hawaii. The Islands are a true paradise for people in search of sun, white sandy beaches, surfing and beautiful nature scenes. Hawaii would become Elvis' favorite vacation destination and he would enjoy many vacations there. 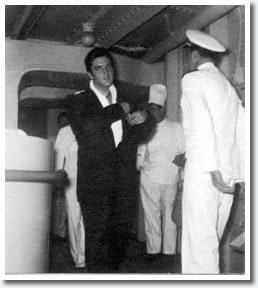 Elvis' first visit to Hawaii was 1957. On November 5, 1957, Elvis sailed for Honolulu Hawaii on the U.S.S. Matsonia arriving on November 9. While Elvis is still aboard the USS Matsonia, Elvis' latest movie 'Jailhouse Rock' opened at theaters across the USA.

Elvis has a press conference aboard the USS Matsonia after its arrival in Honolulu' harbor at 8.45 a.m. After the press conference Elvis and his party head to the Hawaiian Village Hotel where Elvis checks in for room 14a.

Later today the members of the band and the Jordanaires will arrive on Oahu by plane.

In the book; Elvis in Hawaii, former Hawaii resident and celebrity biographer Jerry Hopkins tells the story of the King of Rock and Roll’s twenty-year love affair with the Hawaiian Islands and its people.

Over 100 photos, many previously unpublished, document Elvis’s ties to Hawaii, the site of two of his most important concerts, the setting for three of his films and up to a few months before he died, a favorite vacation spot. A must for Elvis fans, this revealing portrait offers new perspectives on Elvis Presley's life and career. 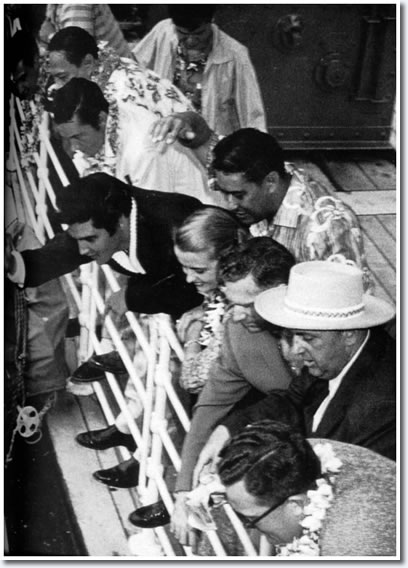 Elvis waves to his fans when the ship docks in Honolulu Harbor. 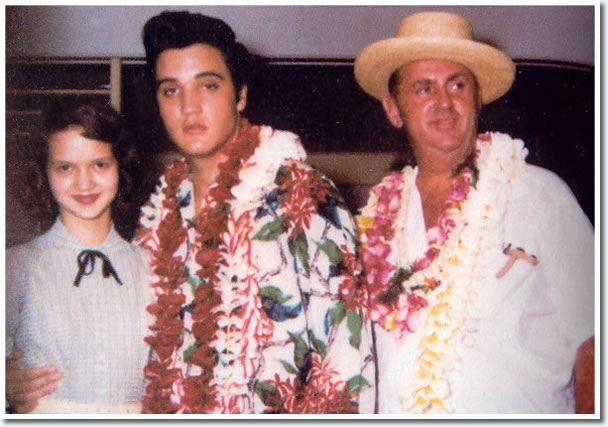 These are Elvis' last concerts of the 1950s. 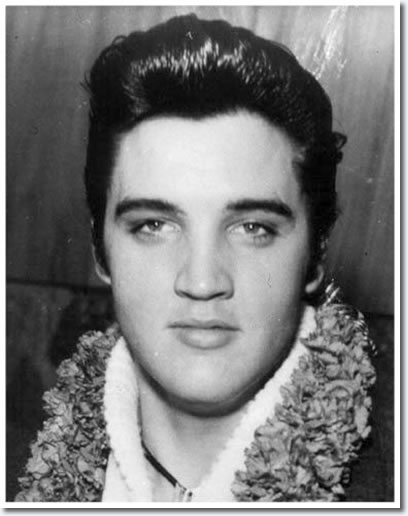 On March 25, 1961 Elvis performed live at the Bloch Arena at Pearl Harbor, Hawaii.

The show was a fundraiser to build a memorial for the USS Arizona, the largest of the eight battleships that had been sunk on December 7, 1941, during the surprise Japanese air attack on Pearl Harbor. Ticket prices for Elvis' performance ranged from $3 to $10 a seat, with 100 ringside seats reserved for people who donated $100.

Elvis and Colonel Parker bought 50 of these special seats and donated them to patients from Tripler Hospital in Hawaii. Elvis' benefit raised more than $52,000 for the memorial fund. On March 30, the Hawaii House of Representatives passed Special Resolution 105 thanking Elvis and the Colonel.

The benefit for the Arizona memorial could be considered a good career move in that it helped Elvis become more acceptable to an adult audience, but his career was not the only reason Elvis agreed to do the concert. He had a sensitive, generous nature, and throughout his entire life, Elvis gave freely to charities and other worthy causes, whether he received publicity for it or not. Of the additional 100 tickets, 50 of these tickets were bought by Elvis and The Colonel for patients from Tripler Hospital.

Five years after this benefit, while in Hawaii filming Paradise, Hawaiian Style,

Elvis visited the completed U.S.S Arizona memorial and placed a wreath there. Photographers and reporters rushed in to record the event, but Elvis sent them away. He did not want his visit to the memorial to become a publicity stunt.

During a holiday to Hawaii in

May 18, Elvis, Priscilla and Lisa Marie with Charlie Hodge, the Gambills and the Esposito's, fly to Hawaii.

Elvis Presley on Holiday, Hawaii | May and October 1969

On May 4, 1969 Elvis, Priscilla, Lisa Marie with the Espositos, Charlie hodge, the Gambills and the Fikes, flew to Hawaii by commercial airline, the Presleys were booked under the name, the Carpenters, Elvis often used this name, from his charator from his 1969 movie, Change Of Habit. The group returned to Los Angeles on the 18th.

On October 5, 1969, Elvis flies to Los Angeles, then continues on to Hawaii accompanied by Priscilla, Vernon and Dee, the Espositos, the Gambills, and the Schillings, in a trip paid for almost entirely by the International Hotel. On the 12th the group returns to Los Angeles with plans formulated in Hawaii to continue their vacation in Europe. The idea is almost immediately dropped when Colonel Parker argues that Elvis' European fans would be insulted if he were to travel there as a tourist before performing in England or on the continent. So the plans are switched to the Bahamas were the Colonel has contacts and he says they will enjoy the gambling.

Elvis made television and entertainment history with his 'Elvis: Aloha from Hawaii - Via Satellite' concert special. The show was performed at the Honolulu International Center Arena on January 14, 1973 at 12:30 AM Hawaiian time. The concert was beamed live via Globecam Satellite to Australia, South Korea, Japan, Thailand, the Philippines, South Vietnam and other countries, and was seen on a delayed basis in approximately thirty European countries. The first American airing was April 4, 1973 on NBC-TV.

Elvis Presley: Hawaii, May and October 1969

Elvis: Aloha from Hawaii - Via Satellite'