When a young freelance photographer in New York City named Alfred Wertheimer started taking photographs of Elvis Presley, he had never even heard of him. That's how fresh Elvis was when Wertheimer first observed him with his camera on March 17, 1956, in New York City. Inside his suite at the

Warwick Hotel in New York City, Elvis Presley finds an envelope containing dozens of fan letters that were sent to him which he proceeded to read. Elvis was appearing on Stage Show, the popular TV show hosted by the Dorsey Brothers.

Wertheimer was hired by RCA's pop record division to take some press photos of the young, new recording artist they had recently signed. Wertheimer shot about twenty rolls of film that day.

With Heartbreak Hotel storming up the national charts Elvis performs this hit along with Blue Suede Shoes.

Just a few months later, Elvis returned to New York City to appear on The Steve Allen Show and to record a few songs for RCA. Elvis and television were made for each other. The new medium of TV was entertaining and exciting and so was Elvis. Wertheimer photographed Elvis during rehearsals for The Steve Allen Show.

One of those photographs, First Arrival, shows Elvis sitting alone at a piano singing and playing gospel music. 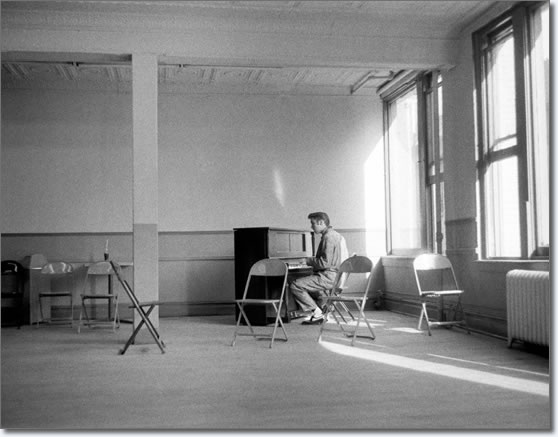 It is a remarkable photograph that captures the charismatic twenty-one year-old in a private and unguarded moment. It was that image on the cover of