The photo below of Elvis is from Memphis Sept 20, 1957 WKNO-TV 'Safety Hit Parade' - Note the world globe behind Elvis, showing Australia. Then listen to Elvis greet his Australian fans. 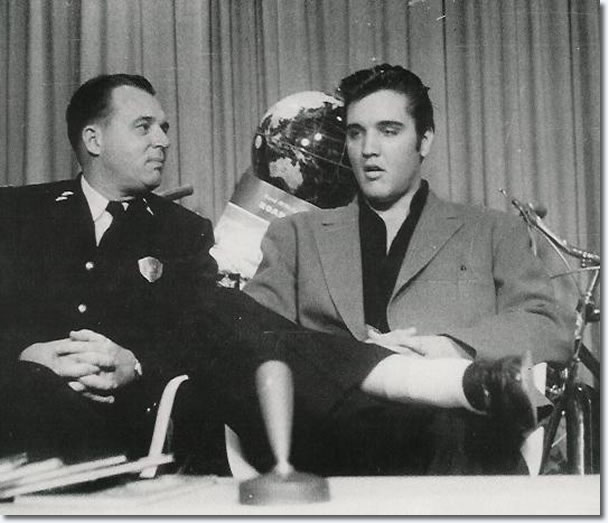 At 7:30 p.m., on September 20, Elvis talked safety on TV along with students from Central, East Humes, Treadwell, White Station, South Station, Messick and Kingsbury schools. Driver education was the subject. Elvis got in some plugs for traffic safety on WKNO's television program Safety Hit Parade. But when he wasn't before the cameras, the rock and roller's dialogue was a little different. For three minutes on Channel 10, Elvis warned youngsters that, although the automobile was 'the greatest invention known to man', it can take away your life mighty fast'. Take it easier', he advised', and live longer'. But in the patrol room, while Elvis was waiting to appear, a student asked Police Capt. Robert Glisson what to do if the brakes of a car failed. Glisson answered', Put the car in reverse' and Elvis cracked', Jump out'. Capt. Glisson showed with a model car the proper way to make a left turn. Elvis' comment: 'On a motorcycle, you just jump the curb'. Highway 51 was mentioned. Elvis laughed: 'Highway 51, the Presley drag-strip'. Toward the end of the program Capt. Glisson complimented Elvis on his courtesy'. I believe in being courteous and polite', said Elvis. Then, with a laugh: 'And now if you'll elect me next congressman..'. Police had expected a big crowd of autograph seekers but only a handful showed up. 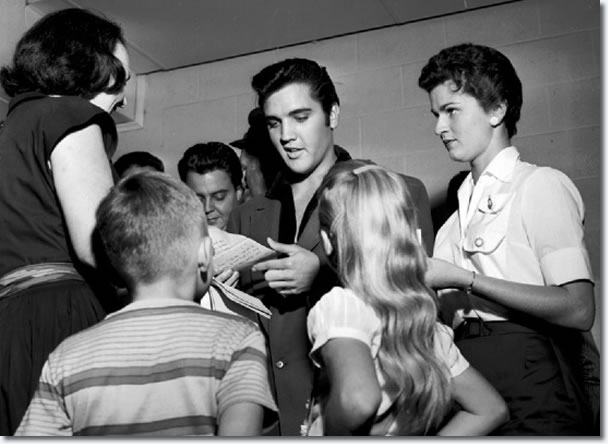 Golden-haired Gail McEwen (foreground), 10-year-old daughter of Mr. and Mrs. L.Q. McEwen, was one of the youngsters on hand at WKNO in September 20, 1957 to get the famous Elvis Presley autograph. Gail's brother, 13-year-old Gary, gave a hip-swinging impersonation of Elvis on the Safety Hit Parade.