Elvis and his party left Memphis by plane to travel to hollywood, on November the 7th 1960. 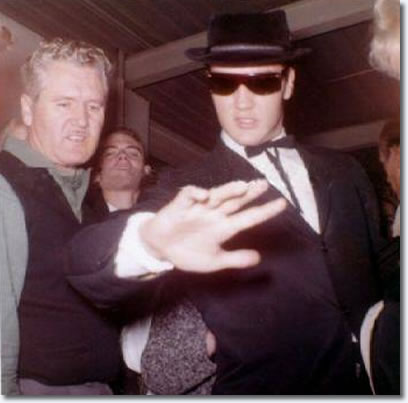 Elvis is pictured at Memphis Airport,with Vernon Presley and friend Gary Pepper in the background.

The photo was taken by Gary's mother. Elvis is showing the condition of his recent injured hand. 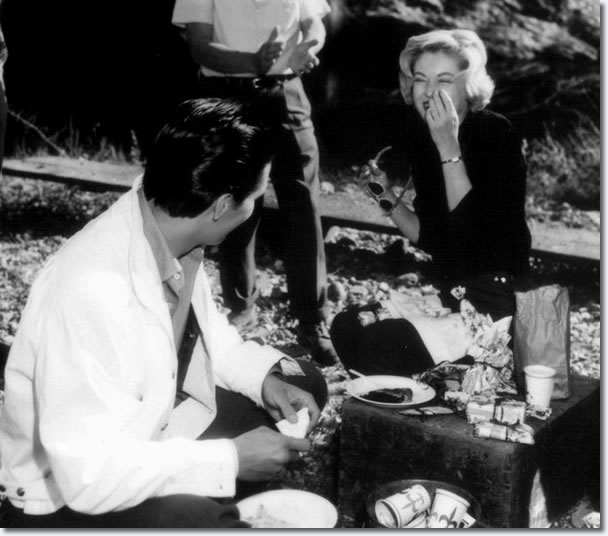 Elvis and Nancy Sharpe (who Elvis briefly dated when he met her on the set of Flaming Star- she was working as a wardrobe dept. at the time) joke during a break whilst filming. 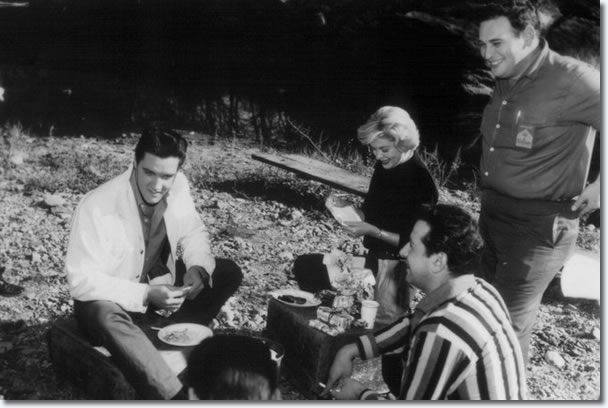 Both women, who were teenagers at the time, met Elvis in 1961 when he, Tuesday Weld and others were filming 'Wild in the Country' in St. Helena. Towey and Alessio were the sort of star-struck teens who would have swum an ocean, walked a desert or climbed a mountain for a face-to-face encounter with their idol.

Towey not only got to meet the King, but came away with her cheek still tingling from the kiss Elvis planted on it.'I'll never forget it. I got my picture taken with Elvis and he kissed me. I could have died a happy girl', she said. Alessio paid her dues to meet the man who was famous for his mellow voice, tantalizing smile and swiveling hips. She still remembers that day in 1961 when she and about six or seven girlfriends from Vallejo High School cut class and stood in the rain from 6 a.m. to 5 p.m. to get the singer's autograph.

'I'll never forget meeting Elvis. It's right up with what I imagine it would be like going through the Pearly Gates', Alessio said. 'I begged and begged my mother to let me cut school that day so we could drive to St. Helena. She gave in. She understood. After all, she knew it was Elvis.'The news that Elvis was in the area had spread like wildfire. When the girls got to the set at what is now the Ink House Bed and Breakfast on Highway 29, south of St. Helena, they soon found Elvis' whereabouts was no secret.

'Despite their loyalty and perseverance, time ran out for the Vallejo fans.'It was 5 p.m., and one of the crew members came out and said that Elvis would not be signing any more autographs. It was all over. Many of the people in line became angry and rude and starting shouting and yelling. We just took our signs and started to leave quietly, when we heard someone holler, 'Hey Vallejo, he will see you', Alessio said. The teens stood single file waiting their turn to have a dream come true. 'He was sitting at picnic table eating a sandwich that you get out of a vending machine - you know those triangle-shaped packaged sandwiches - along with a carton of milk', Alessio said. 'I don't remember what he was saying to us, but I will never forget how polite he was.' of the Vallejo teens, except Alessio's friend Rebecca, were clutching papers for Elvis to sign.

'Rebecca was two people in front of me. When she got up there, Elvis asked her if she had a paper for him to autograph. She said, 'No, I want you to kiss me.' And he did, right on the lips. I wanted to do that so bad, but when it was my turn I was speechless, and I'm not usually a quiet person', Alessio said.

'He took my paper and put it on my back to sign his name. And his thumb was touching my neck. That's right, Elvis' thumb touched my neck. That is my two-minute claim to fame. It might not be much, but is all mine. 'Towey cut afternoon classes from Napa High School that same day in 1961 to meet the man who made young teens swoon with his charisma and Southern charm. Towey also had to convince her mother to let her skip school.'It didn't take much convincing. My mom drove me and my girlfriend to St. Helena to see Elvis', Towey said.'We were just taking a chance we could maybe just see him. We didn't expect to actually meet him.

'But fate swiveled in Towey's direction. 'We pulled into the parking lot of the Ink House, which at that time was a private home, and saw Elvis playing around with some other guys. They were wrestling on the lawn', Towey said. 'We started walking over to where he was, and he jumped up and came to meet us.

He just walked over and said 'Hi' just like he knew us. He was so nice, such a gentleman. He started talking to my mom. We told him we had cut school to see him. He got a real kick out of that'.

Towey admits she was somewhat in shock. 'I just couldn't believe Elvis Presley was standing there talking to my mom and us - just like an ordinary person. He had such good manners. He was truly a Southern gentleman. 'Towey also had the chance to gloat a little. 'While we were standing there with Elvis, a school bus pulled in to drop kids off, and the kids saw us. They were all staring out the window at me, my friend, my mom and Elvis', she said. 'I think I got a little embarrassed. 'Towey's big moment was still to come. 'He asked my mom if she wanted a picture of he and me. She couldn't get her camera out quick enough. Elvis put his arm around me. My mom snapped the picture and then he gave me a kiss on the cheek. It might not have been the most romantic kiss I have had in my life, but it is one I will never forget for as long as I live. How could I? It was Elvis'. 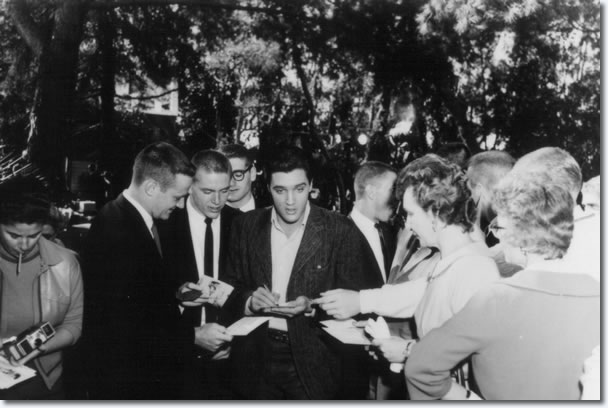 Elvis signs autographs on location for the picture 'Wild In The Country'. 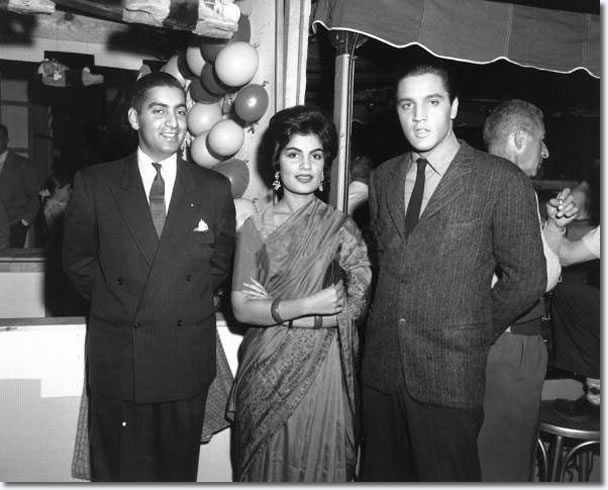 Elvis on location for the picture 'Wild In The Country'. 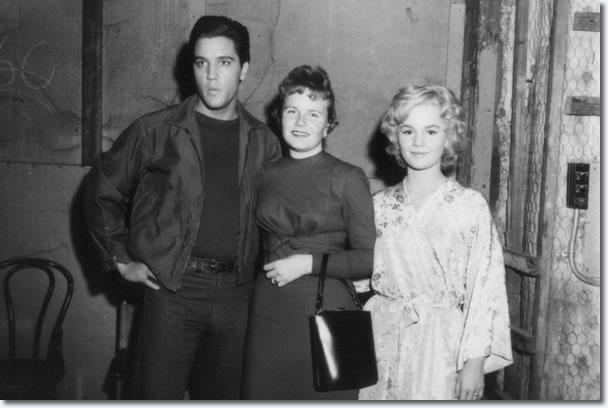 Elvis photographed with an unknown centre and co-star Tuesday Weld.

Gossip columnist Louella Parsons reported that Elvis was trying to put on weight, and when he took Tuesday Weld for a quiet dinner at a Hollywood steak house he had two helpings of strawberry shortcake.

Millie Perkins : I saw Elvis looking around that set and summing up people faster than anyone else could have, and I felt that after a short period of time he was disappointed in Philip Dunne. He tried very hard to make this film better than his other movies and you saw him trying and asking questions. I remember doing this one scene; we were sitting in the truck, and we were supposed to be driving home from a dance or going to a dance, and in the script he was supposed to break into song, turn on the radio and start singing. And to me it was like, 'Yuck', ... finally the director walked away, and Elvis looks at me and says, 'God, this is so embarrassing. Nobody would ever do this in real life. Why are they making me do this?'

'So there we were, both of us having to do something and we just wanted to vomit'.

Elvis turned out to be someone I liked very much. He tried very hard to make this film better than his other movies,and you saw him trying and asking questions,and I just believe the sad thing is that the director did not have the ability to help Elvis through it. I felt there was a man with heart and soul there who truly cared about people. Certainly he treated me as if he cared about me, there was a mutual respect between us, but his life was on a level that my life was not on. I was married to Dean Stockwell at the time, and he was - I felt like he was drifting. The guys were on the set everyday, you know,wrestling on the floor. I didn't even know what girls he was dating at the time, because it didn't interest me, his personal life seemed so silly, and yet I knew I was a victim of it. I felt like Philip Dunne fawned all over Elvis. Elvis attiude was - I saw Elvis looking around that set and summing up people faster than anyone else could have,and I felt that after a short period of time he was disappointed in Philip Dunne,but he was too polite and well behaved to say anything. The essence of Elvis was a fine a person as I've ever met,he treated me as well as anyone has ever treated me in this business.

Extract of an interview by Peter Guralnick. 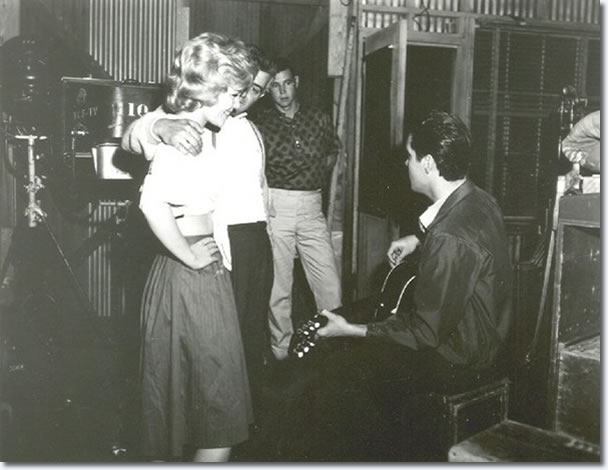 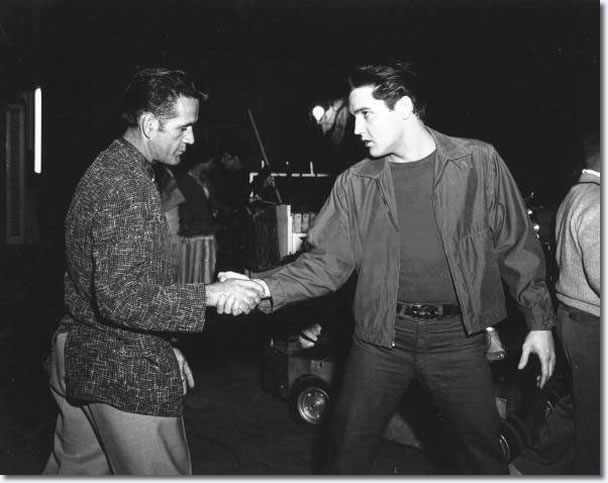