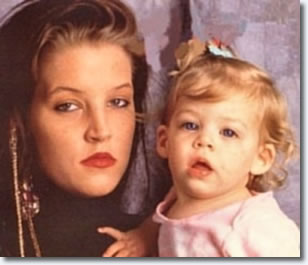 Elvis Presley's granddaughter, Danielle Riley Keough, (born May 29, 1989), known as Riley Keough, is a model. She is the daughter of singer/songwriter Lisa Marie Presley and musician Danny Keough.

Riley is the daughter of Lisa Marie Presley and musician Danny Keough.

Lisa Marie Presley gave birth to twin girls on Tuesday, Oct. 7. The baby girls, have been named Harper Vivienne Ann Lockwood & Finley Aaron Love Lockwood and were delivered by Caesarean section 2:46 p.m. and weighed in at 5 lbs., 15 oz. and 5 lbs., 2 oz. The girls are the first children together for Lisa Marie and husband Michael Lockwood, a musician (Married in Japan January 2006). Lisa Marie, who proudly displayed her baby bump in the September issue of Marie Claire, has a daughter Riley Keough, 19, a model, and Benjamin, 15, with ex-husband Danny Keough. The names acknowledge Elvis (Aaron), Gladys (Love) and Priscilla (Ann).

Lisa Marie Presley takes her little princess for a spin around Hawaii : February 22, 2011

My Life With and Without Elvis Presley : For the First Time ... Priscilla Tells All : August, 1973

Elvis and Priscilla Beaulieu Getting Married

Priscilla Presley video photo album with 'My girl' By the Temptations as soundtrack.

Interview with Gladys and Vernon Presley

Photos of Vernon and Gladys Presley