Debra Paget was Elvis Presley's first leading lady in films, co-starring with him in Love Me Tender (1956).

While Love Me Tender was Elvis' first film, it was Paget's 20th picture, although she was only 17 months older than the 21-year-old Presley. [Debra began her motion picture career at the age of 15. Her big break came in 1950, when she appeared opposite James Stewart in 'Broken Arrow'.]

Debra Paget : 'Although I usually don't form an opinion of a person until I have met them', 'frankly I looked forward to my first meeting with Elvis Presley with mixed emotions. I'd heard and read a lot about this new young singing sensation from Tennessee - and most of it was not complimentary'.

'The first thing I recall was the way he greeted us. When Mr. Berle introduced us, Elvis grabbed my hand firmly and said, 'I'm glad to meet you, Miss Paget'. Then he shook my mother's hand with equal vigor, excused himself, and a couple of minutes later came back with a chair for her. We were together for only a couple of hours but sometimes you can learn more about a person in a short span of time than in weeks of seeing one another constantly. I felt I did. From the very beginning, Elvis impressed me as a pleasant, sincere, obliging young man'. 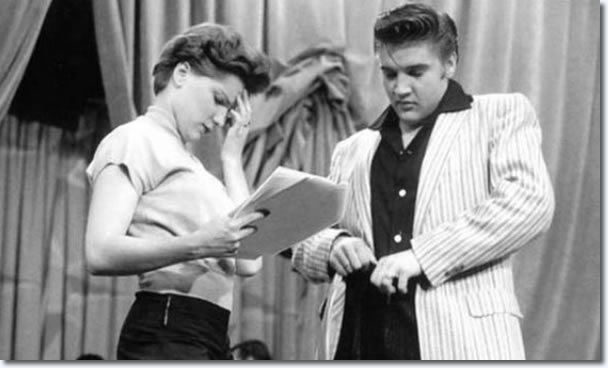 'Elvis won over the cast and crew as he had her a few months earlier'. 'From then on my family and I saw a lot of Elvis, at the studio, on location, when he came over to our house for a swim on Sundays. I grew to understand him better. I also found out some things which really surprised me'.

'At first I'd been under the impression that he was quite indifferent to the attacks made on him for the way he sings, dresses, wears his sideburns, and all the other comments. But he isn't'.

'Not that he'd admit the fact easily to a stranger ... I could tell he was deeply hurt when his performances were criticized, or when he was threatened with being banned from certain cities'.

'Had anyone told me that he'd never had a dramatic lesson, never stood in front of a movie camera, I wouldn't have believed it. His acting was convincing, he always knew his lines, he picked up like a trouper the purely technical aspects, like moving in and out of camera range, and the many other tricks of the trade that usually take months and years of experience to learn. However, he was so modest about his ability to catch on quickly, he was just about the only person who didn't think he was doing well'.

'From the time he first came to our house my folks considered Elvis a member of the Paget clan - a feeling which, I believe, he reciprocated. I had the feeling that our closely-knit family life must resemble his own to quite an extent. And I could tell how much he missed his parents'.

Elvis The Person and on The Set

'On the set he was a 'normal, healthy twenty-one year old. For one thing, he had a large amount of energy to burn. One morning when I walked onto the set. 'Someone shouted 'DUCK!' - a split second before a football shot past my head. 'A moment later Elvis was by my side, breathless and apologetic. 'Ah'm so sorry, Debra. (I finally talked him into calling me by my first name.) Ah didn't mean to scare you'. Elvis and his cousin Gene were always active when they had some free time on the set. When they don't play football they throw a baseball, have mock fights with knives or hatchets, or find some other way to entertain themselves'.

'I will gladly take a chance on predicting that Elvis Presley will continue to retain his popularity, regardless of rock 'n' roll: and I mean popularity not only with the fans who see him in the movies, or TV, or his personal appearances, but even more so with people who are fortunate enough to meet him in person. Elvis Presley is here to stay'. While Love Me Tender marked the beginning of Elvis Presley's Hollywood career, it came at the same time that Debra Paget's career began to decline. In 1955 20th Century Fox had cancelled her exclusive contract after she appeared in a non-Fox film. After Love Me Tender she had roles in 12 more films before retiring from Hollywood at the age of 29 in 1962. She married three times and had one son.

Interview with Debra paget from the April 1957 'TV and Movie Screen magazine.