Barbara McNair, was a singer and actor who helped pioneer substantial roles for black women in films.

She sang from the time she was a small girl in churches and school. She studied at the University of California, Los Angeles before heading to New York to become a nightclub entertainer. Critical notices of her performances at the Village Vanguard nightclub earned her a role in the 1958 Broadway production 'The Body Beautiful'. She would also appear in the 1963 Broadway production of 'No Strings'.

McNair made her film acting debut in the gritty crime drama 'If He Hollers, Let Him Go' (1968). While she made headlines for a well-publicized nude scene in the film, she would don a nun's habit to co-star with Elvis Presley and Mary Tyler Moore in Change Of Habit (1969). Her next two films would see her collaborate with Sidney Poitier, playing his wife in 'They Call Me MISTER Tibbs!' (1970) and its sequel 'The Organization' (1971).

Although she continued to perform in nightclubs, McNair’s acting career migrated towards television work through the 1970s first hosting her own syndicated musical-variety show and then with appearances on such shows as 'McMillan & Wife', 'The Mod Squad', 'Police Woman', 'Vega$' and 'The Jeffersons'.

Her final film was the 1996 Canadian drama 'Neon Signs'.

Barbara attended Elvis' concert on August 26, 1969 DS. After introducing the band, Elvis had Barbara McNair stand and introduces her as 'a young lady that I just go through making a picture with called 'Change Of Habit', and I found her to be one of the nicest, warmest, lovingest people I've ever met'. When audience members complain they could not see her, he has the lights turned back on so she can stand up again. 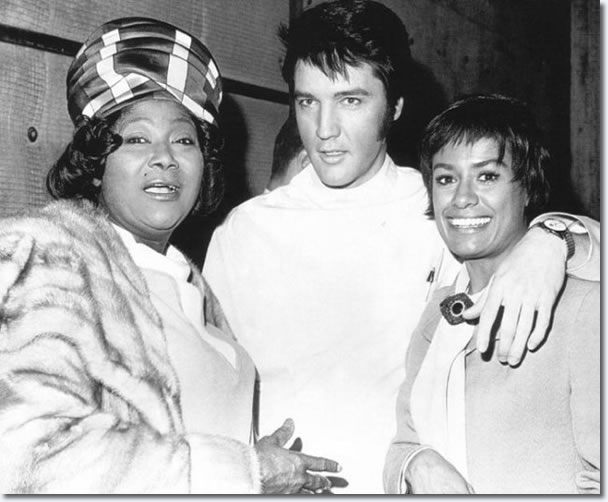 Barbara McNair recalls the visit of Mahalia Jackson :'Elvis and I were sitting there together and Mahalia came on the set and she asked Elvis if he would participate in a fund-raiser that she was going to organize. Elvis was so gracious, 'Oh, Mrs Jackson, I am so happy to meet you, I would love to do it, but I still have to ask the Colonel'. So after she left, he said to me, 'I'll never do it, the Colonel won't let me', but he was so gracious to her, he knew all the time the Colonel would not let him do it.

Elvis Presley on the set of Change Of Habit : Universal 1969