By David English and David Troedson

On January 16, 1971 Elvis attended a day of functions culminating in an evening awards banquet where he and nine others accepted the honour of being named 'one of the Ten Outstanding Young Men of the Nation ' by the United States Junior Chamber of Commerce (The Jaycees).

Elvis was nervous about his acceptance speech. He was touched, excited and deeply proud. After a two-thousand-dollar-a-plate dinner and a speech by future President George H.W. Bush, Elvis gives his address, in which he quotes a favorite Roy Hamilton R&B tune, 'Without A Song':

'When I was a child, ladies and gentlemen, I was a dreamer. I read comic books, and I was the hero of the comic book.

This national honour has been given each year since the late 1930's and recognizes young men who have made great achievements in their field of endeavour, illustrating the opportunities available in the free enterprise system. It also applauds humanitarianism and community service. Scientists, inventors, performers, film makers, politicians bound for the Presidency, and men of greatness in all fields, have been selected for this award over the years, including John F . Kennedy, Robert F . Kennedy, Orson Welles, Howard Hughes. 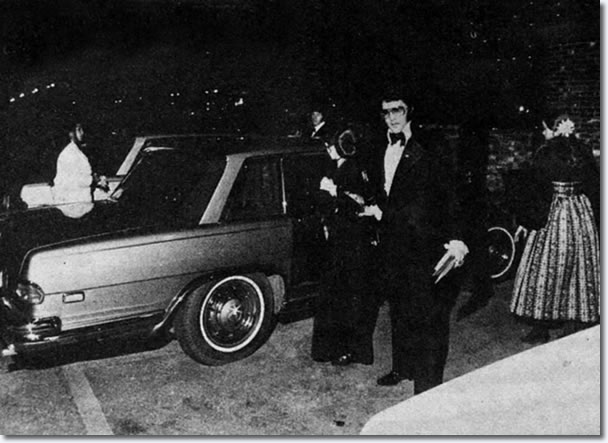 Memphis Tennesse, January 16th 1971: Elvis stayed in a suite at the Holiday Inn, although he still arrived late that morning, for the Jaycee prayer breakfast held at the Holiday Inn-Rivermount. Harold Sterling the host, waited for Elvis to arrive who apparently was held up due to a lost cufflink.

Harold Sterling: 'I was just not ready for someone that theatrical, he had all these diamonds on, and his hair was long. Charlie Hodge was drinking and laughing, Red West and his wife were there. Priscilla had long jet black hair. He was a taskmaster, people jumped, he had ideas on what he wanted and the impression he wanted to give, but he was a benevolent tyrant, he was so good, but he was demanding too'.

'His entrance into the dining room was electrifying the most staid businessmen and society wives with teenage enthusiasm, they all stopped their conversations to watch him enter the room.

Just as he and Priscilla sat down, photographers rushed to their table, graciously.

Elvis allowed a couple of quick pictures, then he asked the newsmen to leave. 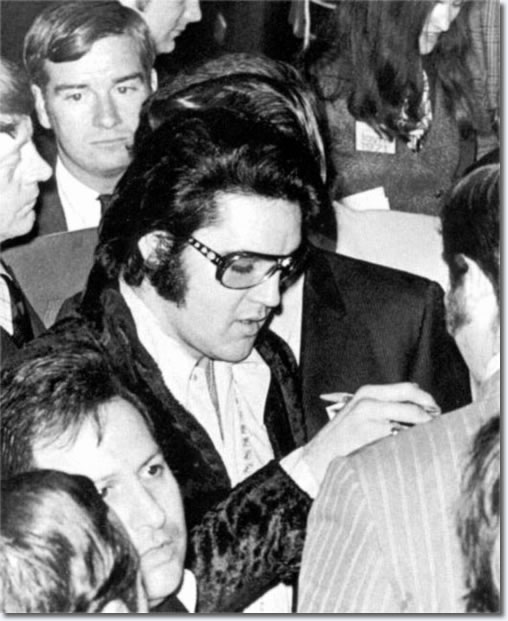 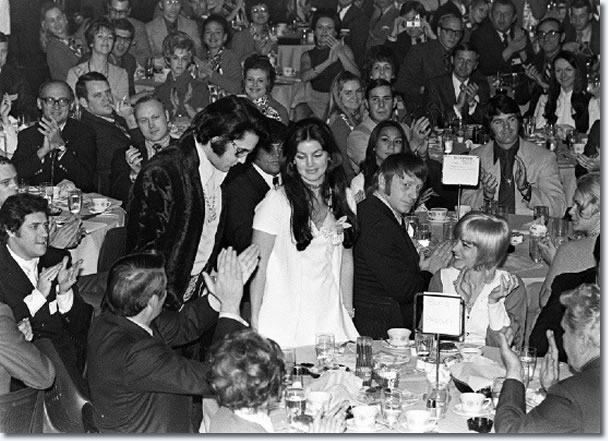 Elvis is being introduced with Priscilla beside him at the US Jaycee prayer breakfast. William N. Morris, former sheriff of Shelby County is applauding to Elvis' right, and just behind Elvis is Charlie Hodge. On the table adjacent are Red West seen to the right of Priscilla, and to her left Sonny West can be seen. (Above Red West's head) is Sandy Schilling and Jerry Schilling to her left. Maybe Vernon Presley is lower right?

Marty Lacker: He (Elvis) told me to handle everything. He said 'find out where I go and where all the entrance's are'. He was just going to fly in the night before from Vegas. He said 'I don't want to stay at Graceland, I'd rather be somewhere close to the auditorium',so I arranged for him to have the whole top floor of the Rivermount Hotel, 'I'd like to do something for the other honorees'. 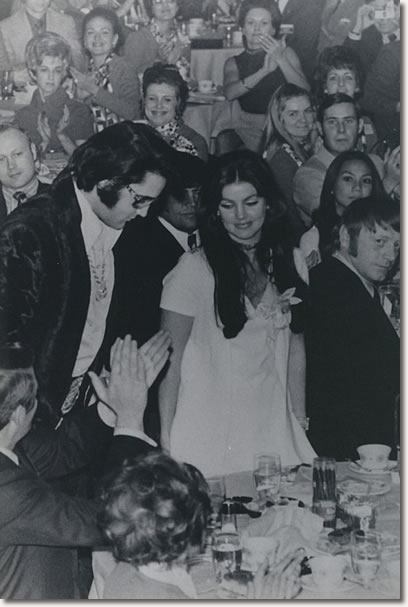 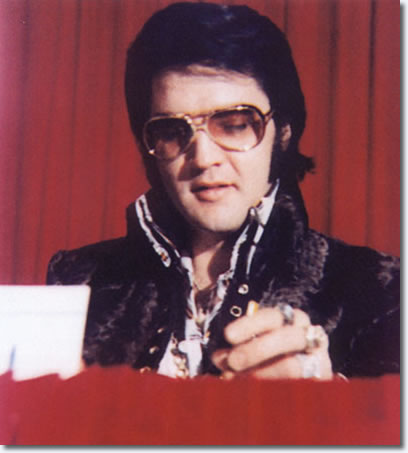 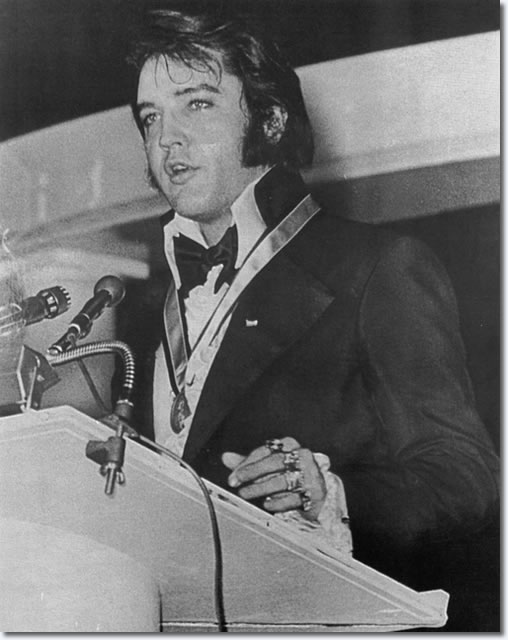 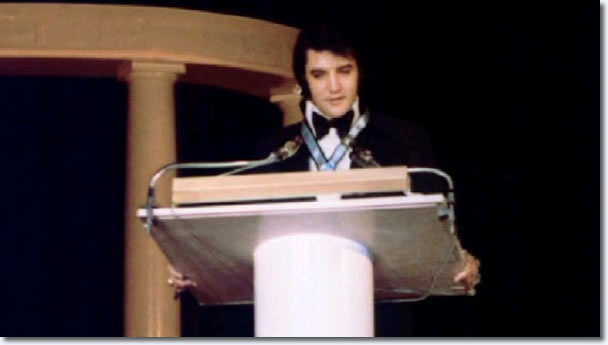 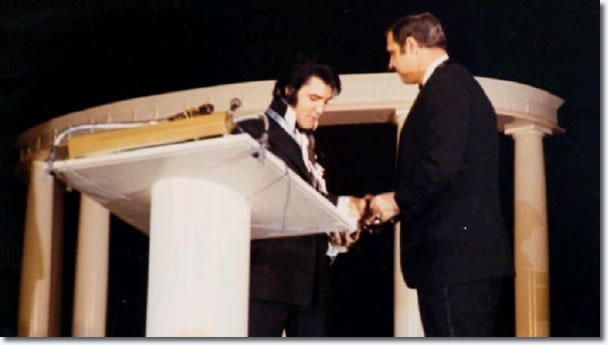 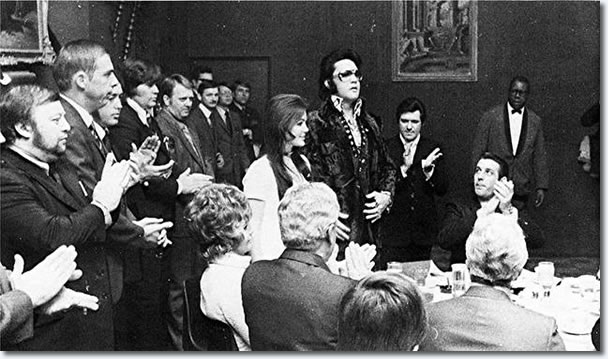 Marty Lacker, Sonny West (at table,lower) Vernon Presley with back to camera, to his left Dee Presley, Priscilla and Elvis stood with Charlie Hodge on the right of Elvis with Sherrif Bill Morris clapping next to Elvis. 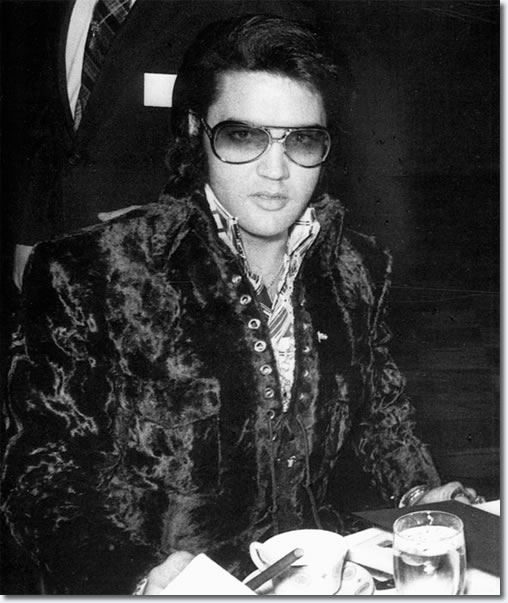 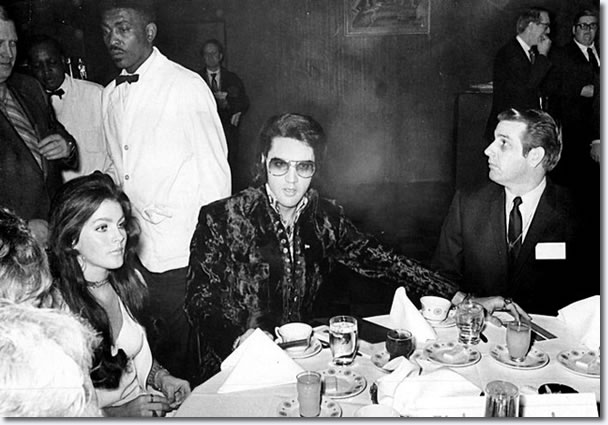 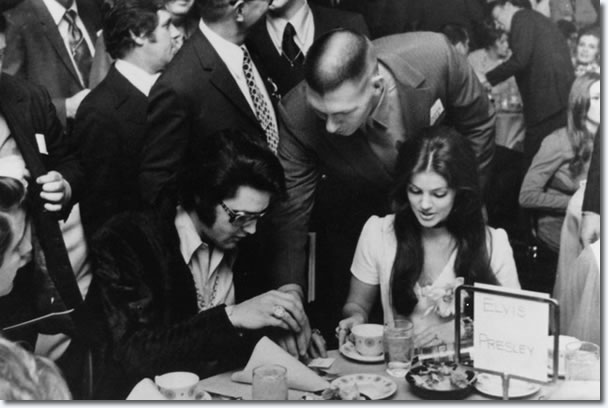 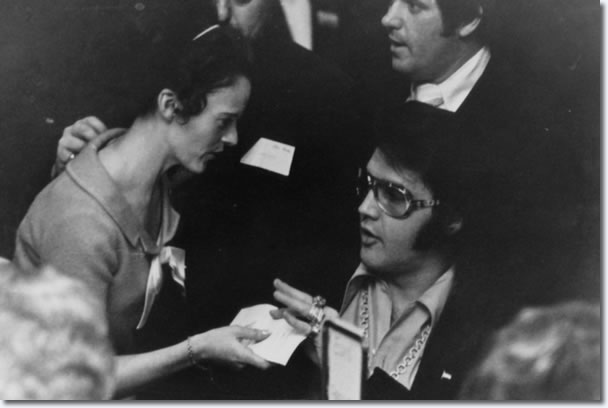 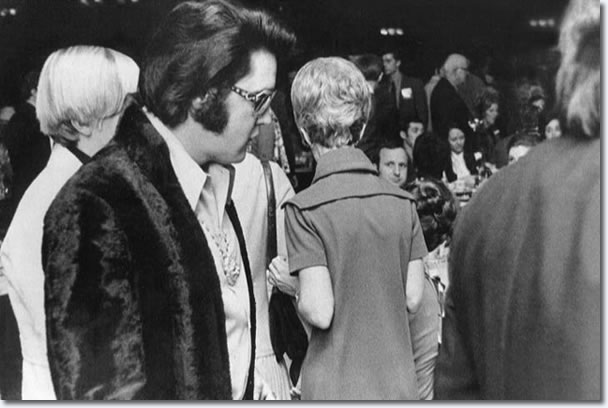 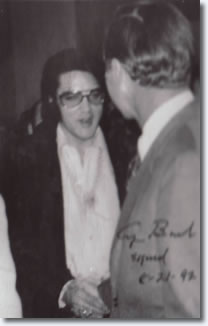 A private question and answer session followed the breakfast.

Again this was without the press. The Press-Scimitar reported from sources at the press conference that Elvis spoke about religion and how its importance to his life, but in the organized sense that he called on God many times for strength, and that 'God is a living presence in all of us'.

'Yes I don't go along with music advocating drugs and desecration of the flag. I think an entertainer is for entertaining and to make people happy'.

The future President George Bush was a speaker, as the United Nations ambassador (filling in for Vice President Agnew) Also in attendance was Marion Keisker in full uniform and Elvis introduced her to Priscilla as 'The lady I told you so much about' and then said 'You know she's the one who made it all possible, without her I wouldn't even be here'.

(Jerry Schilling tells the same story about Marion Keisker, with a reference that Elvis spoke the same words to his wife and himself).

In the afternoon,at 5.00pm Elvis hosted a cocktail reception at Graceland for the honorees and members of the Jaycees.

Marty Lacker: We had Graceland done real sharp, and we decided that one of the guys would meet each honoree at the door with his wife and take them on a personal tour.
Dinner was then arranged and hosted by Elvis at the Four Flames Restaurant. Bouquets of fresh flowers and candelabras, with place cards signed by Elvis with the tcb logo were present on each table. Music was provided by a violinist,and dinner was served by white gloved waiters.

Marty Lacker: Elvis was real happy except one thing, in the middle of the dinner, the side door opened and in walked 'Al Capp' the cartoonist, well nobody had invited him, and the Sheriff's deputy at the door said 'I'm sorry sir-this is a private party, you can't come in', Capp said in a loud voice 'I'm part of the ceremony, and I should be there. It turned out that Capp was going to be one of the speakers at the awards, but we didn't know that.

Capp was drunk, and he started yelling, in a raspy, obnoxious voice 'I don't know why I wasn't invited, I'm Al Capp'. Finally one of the big-shot Jaycees told him he was going to have to leave.

Capp yelled all the way out the door, and he didn't even go to the ceremony.

Elvis said 'Who gives a sh*t?' but it hurt him and it put a damper on his evening. 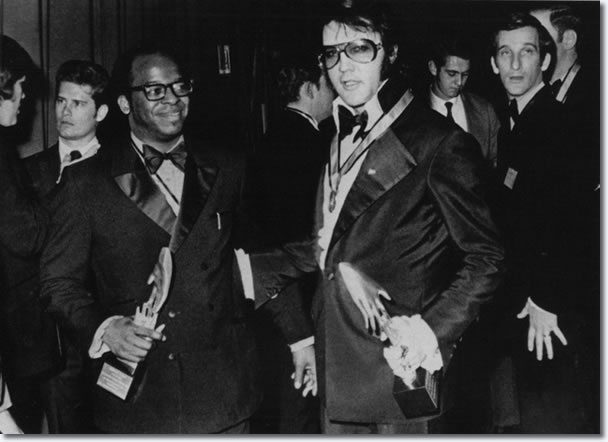 Ron Ziegler : I think he (Elvis) was very pleased to receive the award, and it was an honor to him, and he so indicated, he was expressing a little discomfort of how he was going to react and to relate to the other people who were there, so we talked about that a little bit. It appeared to me at that time that he wanted to reach out and talk to someone different to that what he could find in his entourage. I didn't get the impression that he was limited or dull witted, I found him to be somewhat articulate and poised individual, I did sense however an individual who was withdrawn and an individual who was somewhat shy.

I think all of us were moved by Elvis. He was a natural nice man, I liked him.

Stopped By Security But Elvis Said Let Her Through